I had a happy day off at home. Amongst other things, we went to see The Florida Project at The Komedia.
A remarkable film.

This morning I repacked fresh, albeit builder-dusted laundry, and Vinny collected me at midday.

We have a hotel in Bristol tonight, so drove straight to St. David’s Hall in Cardiff.

It was rainy and nigh on dusk when we arrived.
Perhaps it wasn’t, but the car lights that protested the weather certainly gave me that impression.
If it was not yet dark when we drove into the city, it certainly was when we got to the venue.

Wales had an international game on, and every road we attempted to enter by, was closed off.
Barricaded in or out, I can’t be sure, but Vinny began employing some old fashioned language.

He sought advice from the men in orange that were manning the fences, and was told that every single road into the venue was closed, no exceptions, and that we would need to find somewhere to park and walk it.
I think I caught a ‘Fuckin’ jobsworths!’ floating in through the air vents.
I wondered if I could use this as an excuse not to do my hair.
For me the most testing thing about touring is the relentless poncing up.
The girly fun of it wanes very quickly indeed.

This driving around was messing with my timings for sure.
It was already past sound check time.
On his 4th or 5th effort at trying to be lead by satnav, Vinny found a potential route and Dougie directed him through it by phone.
Satnav said right.
Dougie said left.
Dougie wins, although Satnav had more charm.
Will I be seeing SatNav again?
Yes I will.
We finally get in close to 5pm

This venue wins the award for the nicest backstage smell.
That or I have soap stuck in my nostrils.
It is a smell I know and cannot name, but it excites my senses, like the taste of coriander, or primary coloured glass beakers.
These things cause my soul to thrill.

Here is the catering room that I was trying to remember to Dougie the other day.
Ah, yes.
And I know this dressing room suite.
It has a reception room with a small upright piano.
A well appointed dressing room with a cot bed, a brightly lit make-up desk, and an ensuite toilet and shower room.
It is one of my favourites, although today, unusually, it has curtains only half the size of the windows in both rooms, so I still have to change in the bog.

We are met with hard news.
One of our lovely chefs has last night suffered an appalling loss and she has had to leave overnight.
Her absence is keenly felt for its meaning ,and all are subdued and mindful.
Dinner is had practically and quietly.
I know too well how she will be feeling.

In my room, I set up my Bluetooth speaker, and continue listening to Weaveworld.
I trowel on my face and set curlers and feel glad of my alone.
The lack of communication I am having is affecting my social skills.
I’m finding it hard to maintain conversation.
In my mother’s home there was a woman who only ever said ‘Yeah!’ Always in an astounded tone.
Soon I will only be able to boom
‘FANK YEWWWW!’

Don’t forget how you got here!
FANK YEWWWW!

I think some of the others are suffering from the affects of a long tour.
I know John misses his wife and his boys.
Bus life is tremendously hard. Especially on the tall lads like Dougie and Eric.
Eric, you will remember, was our fortuitous lighting designer find in the USA.
What a gem he has proved to be.
A singular talent.
It will have been a culture shock for him.
In America it was hotels and flights and downtime.
Here it is work by day.
Drive by night.
And then there our tour buses.
Built for our narrow twisting roads. Bunks better designed for interment.
Best suited for detachable limbs.
I am glad for him that in Europe they return to a hotel regime.
I hope I’ve got that right.

Wales won.
Outside the people that pass beneath my windows are in good cheer.

In Bournemouth, outside my window, was a penny whistle busker who had adequate command of three tunes for 3 good hours.
I needed to remember how I got here, then.
That’s a fact, or I could’a fuckin’ swung for him.
Today, here in Cardiff, the joy is mellifluous.

As we head for the stage we pass a beaming Hannah.
How are they, I ask.
Fantastic, she smiles.

She is not wrong.

This room is built for purpose.
It is a modern, tiered and angular affair.
James tells me that unlike rooms where we have battled boom, this has a surfeit of bright.
He says it is the wood and the reflection, or something.
As usual, I find his assessment correct and still he manages to equip me with a sound that is entirely workable.
To me that means that my thoughts on the whole can be directed to nuance as opposed to control and management.
James is a perfect set of ears for me. He is very intuitive.

The vapour provided for the lighting hangs heavy in the air in a most appealing way.
I feel as though I am in fog and lamplight.
The audience are splendid.
They listen intently.
They empathise and play and react.
They accept me as I chose to present myself, and my reward from them is immense.
I am disappointed to see their desire to express themselves in movement is denied them by security, as one here, and another there, attempt to break out, because there is no ounce of aggression implied.
Just life in abundance.
In the end though, security are overcome by bodies that will not be stilled.
The venue erupts into a good natured thrum of pulsing torsos and windmilling arms.
A hive of community, and my heart is filled with love.
In my room I pack my bags and float a while. 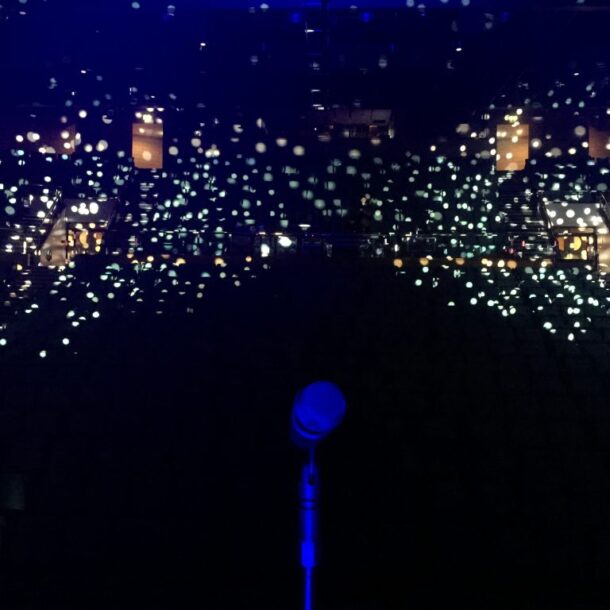 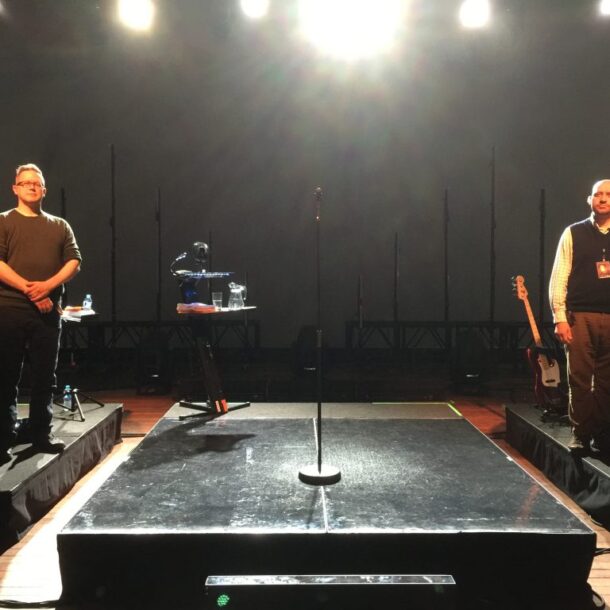 PAVILION THEATRE. BOURNEMOUTH. 16TH NOV. ONLY YOU. ONLY ME. A HA.
Next Article