WHO ARE YOU CALLING HUXLEY? 21 JANUARY. BERLIN.

Who are you calling Huxley?

The day after the Dresden gig, ostensibly a day off, in truth was a travel day.
We had planned a late check out.
Dougie calls and says our Berlin Hotel rooms are available earlier, so my room debris is hastily put in order and we hit the road.
Not only were our rooms not in-fact ready but we had to wait in the lobby for an hour after check-in time to access them.
First world problems.
The lobby boasts a spray of little white Formica bar tables that arc around the base of a massive aqua blue lit tubular fish tank, atrium stylee that seems to be as tall as the hotel.
Inside there are stairs and a lift where you can ascend and view the fish from the inside too.
I make a mental note to check it out later.
I dump my bags finally, and then walk out at 5pm to find some food to bring back.
I don’t like getting room service much.
I don’t like the nervous smiley nodding ritual.
Room service mostly arrives wrong and cold anyway.

Film channel. Good. 43.
I remember film channels better than Birthdays.
I have a three hour bath and listen to my book.
Bollocks.
I call room service.
I ordered Spaghetti Bolognese.
It comes cold and wrong, and we did that nervous smiley nodding regardless.

I am awake until I am not.

In the morning I take breakfast in the lobby. The crew stayed here too yesterday and I see a couple them around gathering meats and cheeses and blinking in the morning.
Everyone is in their own world.
We nod or don’t and all is understood.
I had 4 coffees and then filled my thermos with another 2.
I have a slow pulse. This will get me up to pedestrian.
Another bath and the hour is upon me.
3:15pm, I meet Nick in the lobby and we head for the venue.
I hit catering. Soup! And it’s bloody lovely.
Dave (Sound) appears and tells me Georgie (Manager) will be arriving at 4:30 and is bringing two new microphones that he wants us to try.
He feels the one we have been using has too wide a reach. There is too much of the room being picked up that is clouding the vocal sound. This puts sound check a bit later and means I can have some solids too!
It’s like being weaned all over again.
On stage the clarity is great. Then the out front sound comes on. I’m always surprised by that bit. Now I’m back in world of reverb and woomph again.
It’s fine. It’ll be fine.
With time short I get to the work of dressing, listening to my book.
James comes and brings my monitors.
Sean comes to warm up.

Paul comes and we chat.
Dougie comes and tells us 400 ticket holders have not yet arrived and are neither queuing outside. We need to hold the proverbial curtains.
A great review from our Frankfurt show commenced by noting my punctuality.
If I get a bad rep for stage tardiness now I will not be blessed please 😉
Come on you slackers!

Suddenly the auditorium is full and it is time.

For me this gig was a game of two halves. I felt comfortable in my skin from the out and was enjoying myself. My voice was clear in my ears and the audience were very responsive and giving. So it went for half the set but then for a number of songs I was battling sound again. Couldn’t hear the drums. The keyboard pads seemed to undulate in pitch. Harmonics telling dirty lies all over the place.

I felt like a rabbit in the head lights – Which way to lean? Where to anchor?
Sometimes singing I felt sublime. At other times I was so confused I feared catching the whites of anyone’s eyes for seeing a look of pain and confusion.
I had to restart twice. Once for getting a bridge back to front – and the other, a crowd pleaser, because the sound onstage at that point was so nebulous I could have been lowing like a heifer and be no wiser of it.
The crowd was exemplary. Full of heart and willingness to engage.
Leaving the stage worrying i’d shamed myself I encounter beaming faces telling me the gig was fab.

I read responses to it online and they are truly glowing.
It’s a very confusing experience that happens to me often.
Tonight I have, with some charming people I’ve not yet met, good friends in from Brighton.
One, a dear friend since school bought her nephew who last time we met was a beaming boy of 7 or 8 and is now a great tall handsome brute of a fellow. We compare our bastardised Basildon accents.
I rarely socialise on tour but I have only 4 gigs left in this mainland run and only one more before my next travel day, so with my sensible hat on I indulge myself a while with well loved familiar faces and the luxury of company.
Soon it is time call time.
Nick comes with Georgie and we leave for the hotel.
He had his key card too close to his phone so his key won’t engage the lift to his floor. She has not yet checked in, so I leave the two of them to their Reception dance routine and head to my room, smug of my two pocket wisdom.

I forgot to go up the fish tank, I remember, as my lift creeps up opposite it, like a barefaced peeping tom. 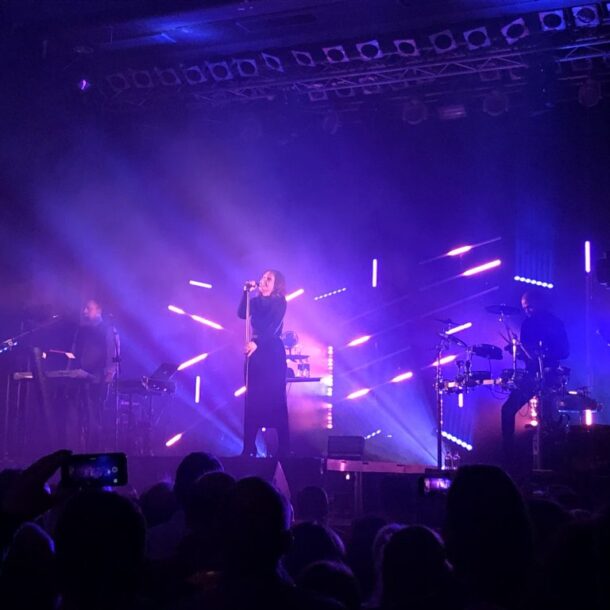 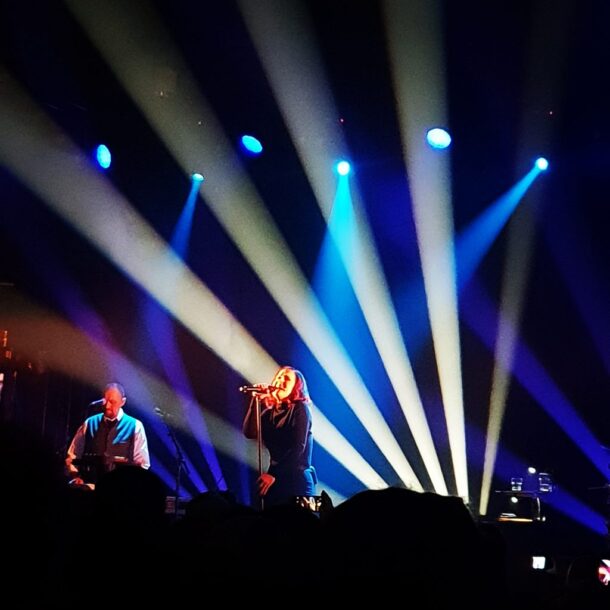 GETTING DRESDEN UP FOR A NIGHT. 19 JANUARY. DRESDEN.
Next Article