We left the hotel in Zurich at 10 and headed to the airport and our flight to Paris.
David was flying back to London at a similar time so we travelled there together.
We said our goodbyes and headed for our respective gates.

On my own wandering, we met again later as David’s London plane was delayed an hour due to fog.
We got a dirty burger together that we neither of us wanted because it was there, and it would kill some time.

I headed off to meet up with Vinny again and get our plane.

I get a message that David’s has been cancelled and had 3 hours to wait for another to a different airport.

Landed, the driver we had been allocated, when called, claimed no knowledge of the booking.
With some more calls Vinny was able to discover who indeed would come for us.
It’s been feeling a bit Cristal Maze making this gig happen, but, ok.

David’s plane has been delayed a further hour.
The upshot is he doesn’t get home ’till halfway through my show.
That will not sell flight to a reluctant traveller any better.

The venue, as befits my lowly status in France, is a small hard black box of a club.

My dressing room is perfectly serviceable, albeit that is sits next to the backstage toilet which every man and his dog seems recently to have evacuated themselves into.

It is fortunate that my sense of smell is compromised and also that a fan, some gigs back, had kindly gifted me a delightfully scented candle.
Today it found its destiny.

Dougie does not seem in bunnyish humour when we arrive.

He has had difficulty getting answers for many weeks regarding this gig, his missives ignored and we have arrived with our rider unhonoured.

Where is my basket of puppies?

Maria would have a hernia.

I have a bottle of wine and some water, but there is nothing but some fruit to eat and the restaurants here abouts keep ‘dinner’ hours and dinner hours are too late for my schedule.

No worries.
I’ve got fat legs.
I can live off them in a famine, I reckon.

Which does not have fat legs, I know.

I may have enough back fat to see me through a Christmas of small club gigs.

It’s all about perspective

Georgie, who has returned today for the last show and to wave off three months of great work completed, that she indeed has made happen, says she would walk out to see what she can find,
but she can’t find anyone who could let her back into the building again.
Our boys having gone out to find dinner.
The doors would lock behind her and there is no phone reception in the basement where we know one woman is sat.

She goes in search of a fire exit which is not locked.

Coincidentally, a fire alarm goes off.

I, hearing it, exit the toilet of doom, but I can’t see anyone or any instructions.

I wonder if it would be possible to smell smoke or if I would need to see it to detect it.

Vinny comes around a twist of spiral staircase and says there is no evidence of fire but will be back if there is any question.
He is a retired Fireman, so I am confident.
Later, we discover, it is a faulty alarm that when triggered turns on all the house lights.

This may fuck with Eric’s mood lighting.

A man, we hear, will be installed next to it to pull out the plug if it shows any signs of fitting.

Later I am told this is happening next to where Eric is positioned.

Eric is discomforted.
He takes his craft very seriously.

We sound check briefly.
I am happy with what I have to play with.

Onstage later I find it very pleasing.
John had asked me afterwards, was It not too dry?
No. I felt plenty of depth and presence in what I need to adequately judge my singing.
I appreciated the clarity.

I tend anyway to be monitored dry. It is a rare occasion I ask for reverb.

Most people using in-ears, work with two ear monitors, so they need an approximation of the ambient sound added in.

I prefer to use only one, my right ear, into which my voice with the bottom end dialled right down and the middle pushed hard, is coupled with a musical element which best carries the key in any chosen song.
Count-ins, and a click too, where needed.

The other ear I want open to the room, so that I stay connected to the live sound and the audience.

With James I am gifted a more nuanced balance.
The detail afforded the levels on every track is a revelation.
One of the benefits of a set having had so many repetitions and a diligent engineer.

Anyway. I’m alright, Jack.
I have what I need to work.
I am not going to be demotivated by a lack of ham sandwiches and some cheesy puffs.

The crew, who have all added some comely heft courtesy of a cheese platter at every gig – rider stipulated, are distraught to find that here, where we know the finest cheeses are to be found, they have been presented a pack of processed slices or some such and directions to a supermarket.

I am in good humour.
It is my last show of a tour I have never resented.
Tomorrow I need not protect my voice.
I can talk with my loves.
What is there that can steal my joy?

I am in Paris hearing voices that sound like summers lost.
I wonder how close I am to the place where my father lived, when coming here from his hometown in Cognac in the 50’s looking for work.
He told me how he lived a year in one room and was allowed no stove, so his daily diet was tinned sardines.
He never ate them since to my knowledge.

At night he would walk to escape the walls and his hunger.

One night he was approached by a prostitute who offered him her services.
He apologised and said he was without work and penniless.
She, having heart, took him to a cafe and bought him coffee.

Some weeks later, he had found employment waiting tables.

He walked the same streets to find her and did.

He took her to a restaurant to buy her dinner as a thank you.

I loved that story.

Before we warm up I meet with a small group of fans that I have connected with.
Faces I have spied for eons populating my auditoriums. Sending their care through cyber space.
Following me when the news had to be eked out.
People that have followed me through this journey and have come here to end the tour with me.
English, American and French alike.
We laugh and hug and I feel honoured.

I am no news in this country, but it matters to me that I play here.
My heat is french and it is the french in me that gave me my fight and the emotional inhibition that feeds my voice.
I am a French National and proud.

We wait side stage.
Dougie is raging mildly.
I think the dodgy fire alarm re-fired the house lights after clearance.

Darkness is found again, finally, and the show begins.

There was new debate about seating this show but we always meant for it to be a standing.

It is altogether a different affair, standing.
The audience can place themselves where it best suits them.
The sound they prefer.
The view.
The proximity.
All dependant on their mood and current experience.
For me, gauging the body language informs my performance.
It becomes a much more symbiotic affair.
It feels more like we are all a body of cells impacting on one another.
Writing the script together.

I have no risers tonight.
I am closer to them.
I am in my element.
In their element.

I will never want to miss days like these.
Days where we are few but each are truly seen.
I am glad I ended the tour here.
Small.
The same way I began.
Remembering the Why.

Later I will write a summation.
For now, I will just savour this. 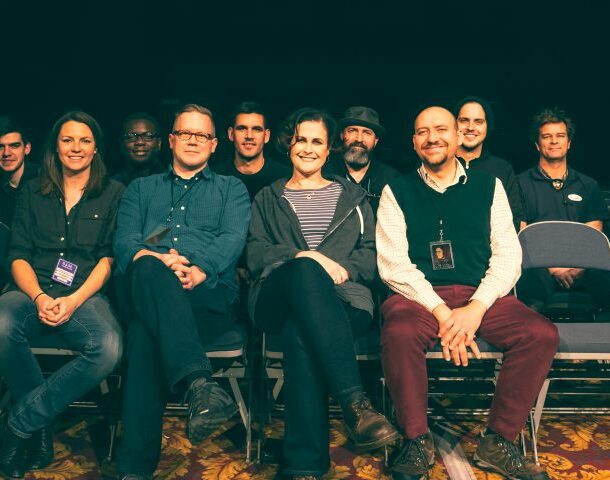 THE DAY AFTER THE OTHER TOUR BEFORE. 2017.
Previous Article 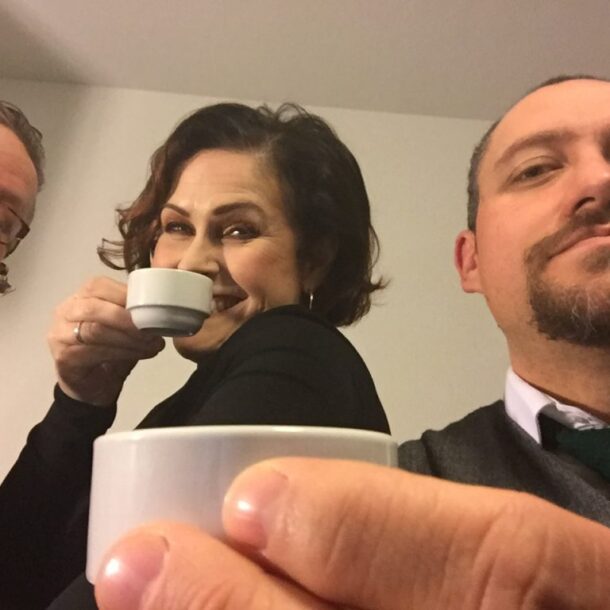