My hotel was booked to be close to my son’s house.
My hours are too late, and theirs too early for touring time tables.
Neither wants to wake the other at the wrong end of the day, so I elect to sleep elsewhere.

My bags, packed, are left in my room for Vinny to collect, and I take the short morning walk to see my people.

My son is not well, but his – is bright and energetic.
A more than competent stander-upper, you will find.
Prodigious, even.
Probably the best use of two short legs I have witnessed.

You know how it is.

I remember exactly 30 years ago taking Joe, then at this same age, into Hollywood’s A&M Studios where I was recording with Jimmy Iovine.
Bob Geldof was on the phone with Paula.
He catches sight of my lad and describes him to his wife.
A golden Adonis. He says.
Proud mother face.

My grandson is now crowned of that same flaxen halo.
My son and his wife, already both better parents than I.
Proud mother face.

Proud, on my jowls today probably mirrors any other emotion, with each in their turn resembling miserable.

I feel glee, but it likely reads as ‘shoplifter with collar felt’,
I don’t know what you mean, officer?

Cheer up, Mum, mine will often say.
Fuck off. I’m smiling aren’t I?
It’s just my face that is not cooperating.

We don’t have long, but I bring out the small things for our babe that I have collated in my journeying.
Hotel guest gifts left for residents with their compliments – Small bath duck from Australia, I think.
A bear from New Zealand, I know.
Peter Rabbit Maracas that my husband found,
and a satin-sanded wooden animal stacking puzzle that we bought in Brighton, wandering the lanes on a rare day off.

We played together on the floor with our things.
Mostly out of context.
That’s the nature of adult sourced kid trinkets.
We can choose well, but still miss a use the infant does not.

We went to the swings.
We had a swift lunch out.
Then I met Vinny back at the hotel, and we left for Warwick.

I have patently over done the ‘Dinosaur’.
I am hoarse from barking.
Yes, of course dinosaurs bark.
Don’t you know anything?

I’ll have to be quiet for a good while now.

The Warwick venue and I go back all my many touring years.
I remember it because it is in the middle of a university campus and there are always murmurations of students to avoid knocking into.

3 points for an Engineer.

It is a fitting, municipal, modern structure, thus our quarters again are warmer and more spacious than those in a traditional theatre layout.

The concert room itself is rather cavernous.
Larger than I remember.
Metal beams that shape the vast high and wide space, suggest a hanger.
The seating, of a practical aesthetic, consists of stalls that tip up into terraces on its three sides, squaring this platform at the head.

The front row positioned closely to the stage, when later inhabited, is occupied by people who give the impression they feel exposed.
Certainly they are caught in the lights.
They wrap their bodies with crossed arms and splay their legs defensively.

I try to avoid looking closely at faces.
I might misread a focussed countenance as displeasure and find myself disarmed.

I think about my husband who takes his music exceptionally seriously.
I still can’t read him.
We see something together and I decide he has hated it, later to be told he had had an epiphany, and the converse is also a frequent misapprehension.

I did one of those emotional intelligence images tests once.
Albeit just on-line.

I thought myself surely to be of the 98th percentile in smarts of that nature.
Bare minimum.
There or there abouts.

Turns out I’m pretty thick in this department.
I probably just scored above an amoeba.

But to be fair, there’s nowt as weird as other folk. Eh?

In my kitchen, my young children sat every morning for years at their breakfast under a huge collaged piece of art work that I love very well indeed.
Took up most of the wall.

It depicts a young woman’s face infused with joy and exuberance.

The very essence I wished for them all.
Who wouldn’t want to send their loves into a day with that beat in their hearts?

I am not feeling good today.
I have swerved the bugs that have plagued the band and crew alike.
I am proud I have now completed 40 odd shows without issue.

Today that tell tale drip at the back of my throat signals caution.
It can go either way.

We aren’t on til 9 tonight, so I can prevaricate a little longer than usual.
Hair works.
Face cooperates.
Dress fits.
Warm up time.

You responding to that bloke on Twitter that didn’t @you.

He #’d me. I protest.
Aggrieved.
Probably a bit embarrassed.

Sean is looking at me like a school Ma’am.

Bollocks. I said.
The geezer spouts about equality being a right, and I concur.
So where’s my right?
I want nothing more than to be equal, and that means calling someone a cunt as freely as any other.
Whatever their day job.
The cunt.

When do I tell anyone that their chosen work is self-indulgence and that which marks them ‘boring and awful’.
Anyway.
What performer isn’t self-indulgent?
I never started singing for his or anyone else’s cocking jollies.
Surely he doesn’t buy into the XFactor twattery that says she’s doing it for her kids?
If she was just about her kids, she wouldn’t fuck off on tour.
What kind of shit cake is filled with so much smug-guff as to think it is ok to denounce another human-being for claiming their own identity, while protesting the noblesse and agency of his own?
He preferred me when I was upbeat? Cheerful?
When was that?
When was I fucking cheerful?
Arsehole.

Sean mixes me a LemSip with my ThroatCoat tea.
John makes of us our circle and we sing our expanding Beatles medley.
Dougie comes to tell us we have clearance and joins in for our last chorus.
Nice voice, I register.
We hit the stage.

The audience are more passive than many, although scattered about I hear loud partisan shouts of approval and encouragement and delight when a song less travelled is performed.
I thrill when that happens.

My voice cracks twice on the Ski outro falsetto lines, which makes me annoyed with myself.

That was down to either too much talking today, dinosaur largeing it, or this threatening cold.
Either way. I must return to muteness and diligent straw blowing.

I have completed 40 shows and have another 16 to go, which takes in some 13 countries in a European winter.
Careful, Mo.

Most bizarrely tonight, I started Only You.
That in itself is not notable, but,
‘Looking from a…. ‘ and shit me if I didn’t forget the where I was supposed to have been looking from.

That was a first.

I’ve only been singing it for 35 years.

35 years.
Fucking self-indulgence?
I ask ya.

On the whole the voice plays well.

The audience, after gifting me royally with considerate quiet and discreet phone presence and a reasonable dearth of untimely toilet visits, are now up on their feet, at last.

Not that I matron require it of anyone.
The dancing is where I am being cooperative.
Tit for Tat, Clarice.
It is not for my sake.
If they are happy to forgo the dancing, I am more than happy to up the grim.

I am not really being entirely honest here.
That is salt sweat.
In truth the segments of rote-sing work for me too, in the end.
Like a work-out cool-down.

I’ve been all night that kid in infant school.
In the dining hall with the chairs stacked.
Tuck in tight.
Tiny little ball.
Climb inside.
Now unwinding.
Stretching.
Stretching.
Up to the sky.
All your branches.
Reaching for the sun
Tall as you can…

The last dance is pony cantering.
Clippety-Clop.
Skip ahoo around the room.
Shake it all out.
Tiger churning butter.
Shake off the dark corners.
Let beat the squeezed heart.
Shake off the impending still. 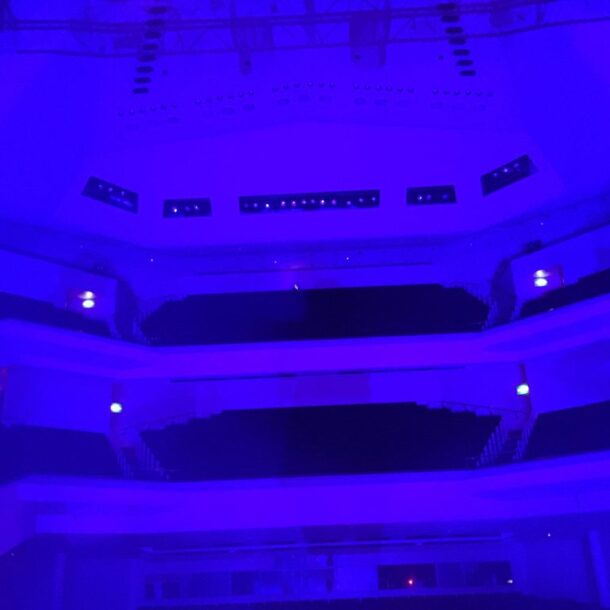 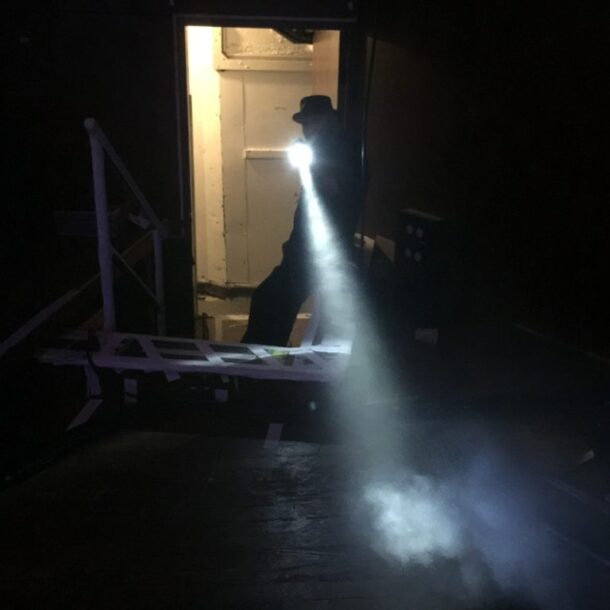