I am a hen scratching for yesterday mornings.
I find a strand and worry at it.

We leave at midday.
Vinny has picked me up a pitta wrap that I have ordered on-line so as to spare me another service station fast food outlet.
This was certainly fast, but more likely built from things that are meant to be ingested.

We head to Bristol.

Bristol is a significant city to me.

We might have moved here had I not needed to be in commutable distance of my parents in Essex.

I have children here.

My grandson is Bristolian, born.

It is where I recorded my Hometime album with local team The Insects.

It is home to two of my truest beloveds.
Deb, first as Basildon muckers and then she who managed me through Hoodoo to Hometime.
More Kin than cousin.
Tight in the weft.

And Kim, who I met when I was 7, and she, 8.
We later formed our first teenage band together, The Vandals.

I thought, when I met her, that Kim must surely be dead rough.

We both lived in Basildon’s Lee Chapel North.
She was allowed to play-out beyond the sight of her house.
She had to wander three streets to get to mine, albeit that they were all pedestrian.

They were the family that had ‘that’ dog.
The school field invader.
The one that went out in the morning and came casually to the playground to meet at the end of class for the lead-less walk home.
Envy was mine.

We met on our New Town council estate.
Pressing our heels into the mud verge fronting Little Lullaway.
Where young saplings were newly planted, that they might grow and screen the road from the adjacent duel carriageway.

Do you know ‘There’s a hole in my bucket’ she asks, baldly, apropos nothing.

I’ll teach it to you, and then we can go on Junior Showtime.
You can be Liza.

That reminds me of a few years later, when in daylight, I was sat in the bath and my elder sister, all of 12 years old, burst in with our next door neighbour.

We are going to Woolworths to buy some American Tan tights so we can be dancers on Top Of The Pops.

It seemed perfectly reasonable and I wished I had thought of it.

Kim and I wove out and then back into one another’s lives as we found ourselves together again in the same secondary school, soon to hook up more permanently.

Kim’s mum was ferocious.
A doughty Welsh matriarch.
She terrified all of our friends and sucked her teeth at anyone who presumed to glance her way.

To my sheer and utter delight, me she took to.

I had one of those faces that unreasonably flagged me up ‘Good for nothing’ and consequently I encountered many confusing unkindnesses from those in positions of power.

We had a third friend, and her parents despised me.
The elder giant brother beat me up one day without notice or provocation.
An unknown genus, that.

One time I knocked there and her mother shouted from the hall, teeth gritted and eyes glaring,
‘Get that slag out of here!’.

Thoroughly unreasonable seeing as I was the only virgin left standing.

Later, when I was on the telly, the same woman remembered me with fondness and love.

I though, never forgot.
My head never knew how to drain back then.

Kim had a sister who was one of the very few we knew who made it to University.
She never accepted defeat.
From our factory fodder beginnings, where she had to take her English O’level some 13 times before gaining the grade she needed to matriculate, she is now an internationally celebrated and published Doctor of Linguistics.

Bristol’s Colston Hall is not well loved, even by its partisan county folk.
Named for the notorious slave trader for whom business here thrived, it has branded a blight on the dignity of the good and righteous that are many in this creative, cultured city.
Home to both poverty and privilege.
I guess you could say that of anywhere, but I don’t remember the privileged contingency in Basildon.
We were all of a class, and consequently didn’t recognise poverty much.

The hall is soon to be demolished, I believe.
She is no great beauty even in her working best and the underskirts of her backstage are dank and questionable.

The punters she takes in, however, are as fine as any, and tonight many of them here are mine.

It feels like a home gig.
I have all the comfort and the anxiety that comes with that territory.

Kim is here with her sisters, and our school mate, and our Bristol girl friends.
My darlings – son and daughter-in-law too.
David has driven from Brighton to share a few hours for which I am made very happy.
I am glad of them all.

I am having a terrible hair day.
I have tried 3 methods tonight of curling.
Sprayed and waxed and now it looks to me like an ill fitting wedge of toupee.
I could make Trump look artfully coiffed.
Fuck, it will have to do.

The stage is smaller.
I fear I may totter from my riser.
My mic stand needs to be set to the very front to help the light show, and I worry I may spin it away and do some poor soul damage.

I have worn a petticoat tonight that I hope will smooth my hips, but instead, once on stage, it immediately rides into a thick ruffle at my waist and I am certain it looks like a sumo blokes pants under this condom of a dress.

The sound on stage is far from optimum, but by no means the worst.
Mobile phone activity is on the good side of respectable, other than that geezer some ten rows ahead of me to the left, whose lap-facing face is illuminated by his web browser.
This throughout the song of my mother’s demise, and after my heart wrought explanation.

Not for long though.

The next song is Only You.

This is worthy of a face forward, and he lifts it to film me instead.

I give him my dead eye.
I have a talent for dead eye.

In Beautiful Gun, Sean’s bass falls off, so some dirty noise is left to the audience imagination for a bar or two.

Singing the song ‘Other’, the thought comes to my mind that I have never sung it better, so immersed in it am I, and then, a few words into the second verse, we have a computer malfunction, and a blast of noise not featured anywhere at all in our set, emits like a wet fart in a meditation class.
Thus my hubris is short lived.
Beyond these things, we have a good one.
I am comfortable both in command of my terrain and when I go off road.
The slips don’t phase me and I find barb and quip and ungent on my tongue when I need look for them.

I would say
‘What doesn’t kill you makes you stronger’

I don’t think anyone’s lungs were made titan by a heavy bout of emphysema. 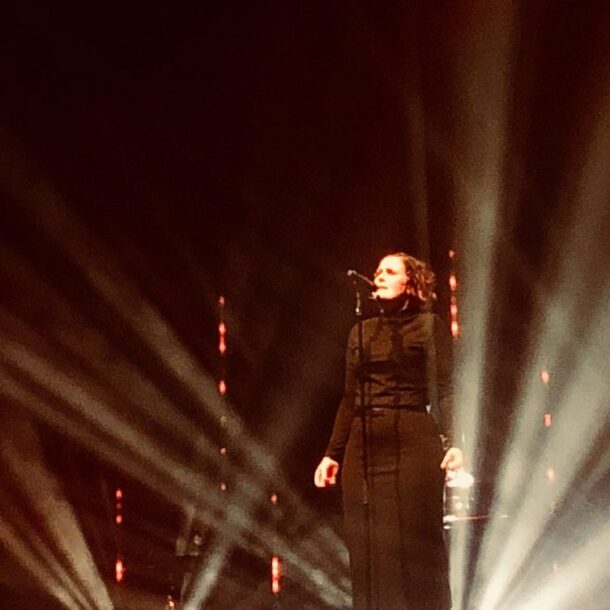 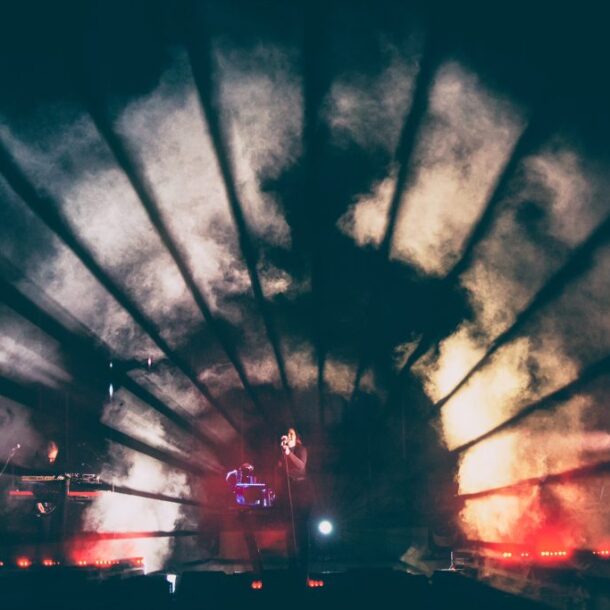 THE LIGHTS ARE STRUNG LIKE PEARLS. MANCHESTER. NOV 22ND
Next Article