THE LIGHTS ARE STRUNG LIKE PEARLS. MANCHESTER. NOV 22ND

I had a day off in Manchester.
I wandered Christmas markets under drizzling skies.
There is always something new to learn, i.e. water resistant means fuck all.
I bought a new bra that shaped me just the two tits, as opposed to the four.
It’s my preferred look.
I walked at dusk aside pop-up bars and purveyors of sweetmeats that warmly lit and cheerfully populated, beckoned me in, and I stoically shunned.
I bought a take-out salad, which from a wet paper carrier bag, deposited itself on the floor in the queue at Boots.
Yes. I do need that many salt packets.
I went to the pictures where the outside street disco permeated into our theatre, becoming part of the sound track.
I marvelled at how, countywide, football fans all have the same accent.
I admired the young shop girls that dropped their coins into the hands of those who had less.

I returned to my room.

Elsewhere the touring party are dining large and will be well into their cups.

My new bra has been marinated in Tuna juice.

In the morning I missed breakfast and instead walked out at midday to get myself a pitta wrap.

Then Vinny knocked and we headed for the gig.

Straight into sound check. The auditorium is fine and impressive.

It makes me think of The Starship Enterprise.
Or the inside of a massive pinecone fairy house, replicated digitally, so that curves are cut as angles.
Futuristic.
Of Space.

The sound on stage, however, is as tricky as I have ever met on this tour.
I mouth my first note and it comes back to me like a vocoder.
Hello Tardis, meet me,
Techno Dalek.

Will the audience deaden the ring? I ask Darren.
Not much, he says.
It is the concrete balconies that causes the slap back.

I have had to face uncooperative acoustics before, but this time I have Darren at the helm and James in my ears, so I am not alarmed.
It will be what it will be and I am far enough into this tour that my body knows how to make the sounds I am striving for.
Anyway.
It’s Manchester.
I love playing here.

I have dinner and catch up with some of the crew, and with the women of our party – Our fine Chef Sarah, her live-wire assistant Sally and our Merchandise seller Olga.
These are all strong, indomitable women.
A touring life is relentlessly hard work and there are many privations.
There are few women in this game and I rejoice in the strength, sorority and wisdom I find here.

Today, I get some time too with Eric.

Eric, as all remember, is the lighting designer we, by sheer luck, fell upon at the outset of our American leg.

In America, Australia and New Zealand, we were limited to working with, while certainly talented local practitioners, those who had only house lights at hand and who had had to learn the set daily on the job.

People whose work came by fine recommendation, but that we had no experience of.

Eric was a third fall back.
Someone known to the second person that had to pull out at the 11th hour.

He had previously been booked in establishments local to him by the day, and had only Theatre experience, perhaps of a burlesque nature, but he was coincidently available, and his sponsor commended him, as unknown to us as his sponsor was.

Eric had never done a music tour but fancied it, and why ever not.

When I met him, I thought him to be a lad in his early 20’s.
In fact he is in his mid 30’s.
Just a very fine and fresh looking beauty.

What we found ourselves to be dealing with was a man that spent every available hour at his desk, honing his vision and carefully adjusting it in each new venue to incorporate what ever lights he had at his disposal.

Soon it was apparent that his was a prodigious and unusual talent.

It was too late to obtain work visas for Australia, but…

Do you want me to see if we can get him for Europe, Mo? G asks.

In England we had lined up a design company that we’d worked with before, while at the beginning of their journey, and we had been very happy indeed with their work.

Since then, though, as is the way, they had grown, and had become feted by bigger clients, and while the good intentions were there, their time was clearly not.

We were fortunate in that we had our man Will ready for us in the UK.
He came to us through the lighting company that provides our touring rigs.
He has prior knowledge of my performances having himself lit my festival shows.

Will, now a valued stalwart of my live team, was going to run the show, being both an exceptional lighting programmer and technician, but he was to be working with the design that had not yet truly materialised.

As Will had not yet seen the new set, It was decided that Eric would re-design the show in his own vision.
Eric would adjust and expand on the lay out that was in our gift, and he would run the show, which he plays as though another band member.
Will took up the vital parallel role of Lighting Technician and together they make for a very fine tag team.

Consequently, I have a light show to die for.

The stars aligned in my favour.

Dressed and in my room, John and Sean and I warm up.

Our Beatles repertoire is expanding.

We discuss The Stones.
I like them. Sean does not.

It transpires that through marriage Sean is related to Keith Richards.

He laughs as he tells me that his Artmagic band partner, Richard Oakes, pointed out that Sean had long kept that fact quiet.
Had it been Bucks Fizz, he said, he would have sung it from the roof tops.
Carried a banner.

Sean is a rare beast.

An encyclopaedic font of all obscure knowledge.
A sharp cerebral intellect.
A craftsman
A wearer of tweed.

We are going to have a good one tonight.
Indeed we are, we all agree.
The sambucca glares.
Unopened.

And as it happens, tonight we may have been graced with the audience of the tour.

How thrilled we were to hear the enthusiasm for new material.
Songs from The Minutes being received like chart toppers.
The pin drop quiet.
The waves of bodies pulsating when the beat suggested it,
and heart given when mine cracks.

Obviously there’s always the one shit cake that tells you to get on with it, when I stutter at my talk, but no matter.

These people fed me fine, fine dishes.
I leave the stage replete. 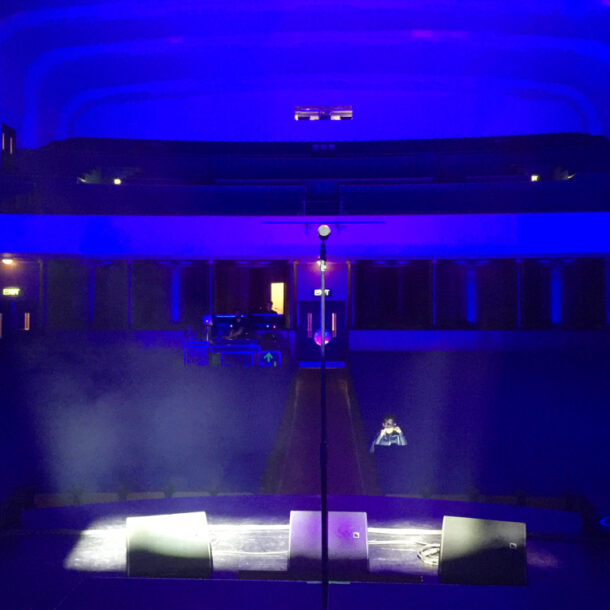